N.B: This is not my write-up, I shared it because I share the view of the writer, and wanted everyone to see this. 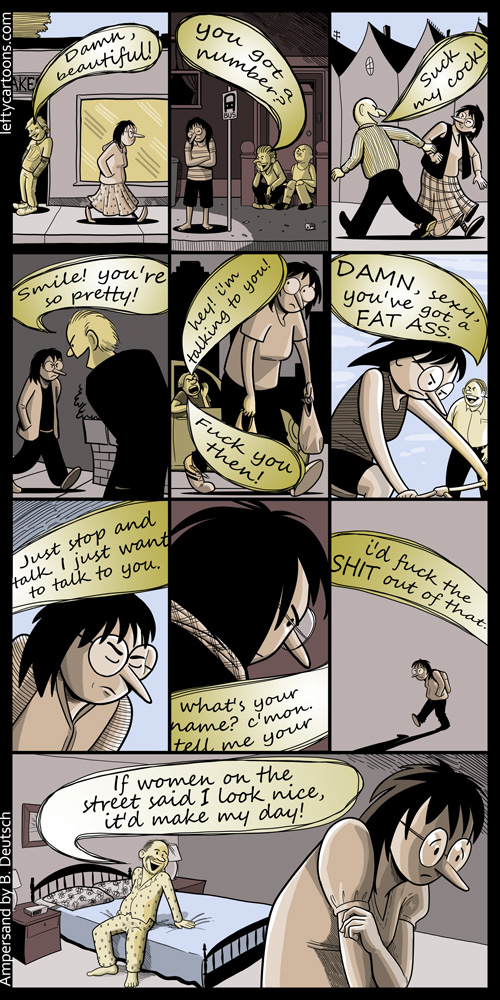 I stumbled across this comic a couple of weeks ago and all I could say was “Amen!” This illustrator really and truly gets it.

And by “it,” I mean what it’s like to be a victim of street harassment. For most of us by the time we’ve hit puberty, (if not before), we’ve been subjected to the cat calls, the tactless pick up lines, the comments on our boobs and backsides more times than we’d like to remember.

I’ll never forget being in the mall with my mother one weekend. Wearing a pair of colorful denim shorts, I had to have been about eleven or twelve. We were near a jewelry kiosk when a man on a cell phone interrupted his conversation to state to no one in particular, “Whew, look at that ass.” The ass he was referring to was mine.

That was the first time a grown man had ever made public mention of my body. As a girl I used to daydream about what it would be like to gain the attention of the male kind. It just knew it would be flattering, intimate, and welcomed. Suggestive, yet respectful.

The complete opposite of that mall interaction.

As women, I don’t have to tell you that such attention is annoying, threatening and worst of all degrading. I wish I could say that the foolishness stopped there; but that would be a lie, it only got worse. Today, every time I leave my apartment, I put on what I call my “don’t f*ck with me” face and hit the streets of New York. As much as I loathe the winter, I can’t help but be grateful that my puffy, mid-calf length coat curbs some of the harassment. But not all of it.

Last winter, I stepped out around 6:30 p.m. on what had to have been the coldest night of the year. Ever conscious of my grandmother’s pneumonia warnings, I was bundled up like no other. Literally, the only things visible were my eyes. And still, a man getting off the bus, couldn’t restrain himself. “Aye.” And then louder, when I ignored him, “AYE!”

Didn’t this man getting off the bus that night realize that I was a woman alone on the street, in the dark? Why would he feel that situation was the time to try to approach me, a complete stranger? How many rape scenes resemble that scenario?

I fear that the  street “hollerers” aren’t the only men who don’t get it. As the comic illustrated, when you tell a “regular dude” about the happenings of your day, don’t be surprised if he responds in complete ignorance. This has happened to me personally. He literally said, “I would love for women to hit on me in the street.”

Sure, men don’t receive compliments on their physical appearance like women do and they think that sucks. But they don’t know how good they have it. It’s not complimentary, it’s threatening. What wouldn’t I give to walk the streets in peace? The point is, many men lack a general awareness of how exhausting it can be to just have a vagina in public.

I know I don’t speak for just myself when I say that as women, we spend a lot of our time out on high alert.

As great as it is being a woman, it’s scary too. If more men knew this, I like to think they’d be less inclined to assault us on the street.

What I Think?
I read this article on a website known as Madamenoire.com and I wanted to express my opinion on it.
As a responsible guy, It hurts me seeing other guys acting like this, for goodness sake, this girls/ladies are not a walking sex target, they deserve respect for the important roles they play in our lives, and if you can’t approach a lady in a courteous and responsible manner, then you are not desreving of her.
Also, if you do approach her, and she rebuffs your advances, respect her decison. She doesn’t have to give you a reason for turning you down, and she owes you no explanation. You know fully well that she might be in a relationship, or she might not be ready for one, or she simply does not fancy herself and you as a couple. So leave her and let her be.
You don’t have to resort to threatening or trolling her.
And to every lady who has suffered this savage like-like behaviour from guys in the past (or in the future) I tender an unreserved appology to you all.
To all the guys out there, thank you for acting gentlemanly, and all the ladies, understand that not all guys will act like this, while some guys actually mean no harm, but still “We Are All Sorry.”
God bless you all.

On Respect – With Love From Dad

WHAT I HATE THE MOST?

Song Of The Day: 2Face- Only Me